Sidebar
You are using an out of date browser. It may not display this or other websites correctly.
You should upgrade or use an alternative browser.

Ok, thats a clickbait title if ever I saw one and I guess I have your attention.
The subject I wanted to explore is how making boobs bounce, or flop up and down can be used for fun, punishment, torture, entertainment and well, yeah, fun.

It's of course no secret I have a thing for big boobs and finding ways to mess around with them, binding, clamping, spanking, and so on. In the earliest internet days there wasn't a lot of this kind of things online but there was one prolific source, a French guy who went by the name Gerard Titsman. He had some wonderful models, all with large and very floppy tits that he would torment in a variety of ways but his real specialty was making them bounce and slap.

He would get his models on mini trampolines, topless of course and film them bouncing in slomo to really capture the fluid motion of tits in flight. This was the first time I'd seen clear, in detail slow motion boobs flopping and swinging and slapping down hard. It was clear this was not pleasant for the subjects, the heavy boobs really whack around with a lot of momentum and the resulting slapping up and down was clearly painful. He also made a few video where he had several models jogging, a simple variation that put them outdoors and resulted in some mesmerizing footage.

I soon started to incorporate this sort of thing into my meets with a couple of big titted subs I knew, mostly using the mini tramp that I quickly purchased but also adding some skipping into the mix. In person the sound of the slapping tits is pretty amazing, and it's easy to see why this hurts quite a bit when you see a good kilogram of flesh slapping up and down like that. It's also a pretty humiliating thing for many gals, having their big heavy hangers flap up and down really emphasizes how their once youthful pert shape has disappeared!

I still use this whenever I can, I even sneaked it into the recent big boob bingo challenge. Getting a photo of boobs flying UP was one of the tiles, I know this takes a lot of goes to capture and so they would spend a bit of time jumping up and down, boobs flapping wildly just to capture that one photo. Sadists never sleep. 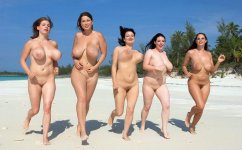 I have two options on this from 2 views. 1st, my submissive side love being teased by big boobs, having them bounced infront of my face is a huge turn on, never fails to turn me on. 2nd, my vanilla side just loves to see them bounce, even if they are well contained in clothes and even in a sports bra, (they don't even need to be very big) seeing a boob that bounces turns me into a moth attracted to a flame, its so hard to look away or focus anywhere else. Especially hard as i am quite tall, so when i'm talking to women, my eyeline to their eyes also tends to be downwards.
Reactions: mistresskitty245, subbysecret and droptokon

My husband loves bouncing my boobs, loves fucking me from behind with me bent over and my boobs hanging free so they bounce when he thrusts, and he likes to weight my nipples with clamps and a heavy chain, or to tie the chain to my collar so I feel the pinch as well as the slapping of my heavy DD's and, well, just the weight of them moving.

I have to strap them in quite tightly for cycling, I run sometimes but very occasionally simply because cycling is SO much easier! I wear a sports bra, and a compression base layer AND a lycra top and STILL they have a life of their own...

One time, I had to push them through holes cut in a T-shirt, paint them with liquid latex and bind them quite tightly with PVC tape for a ride... I didn't go very far and was extremely relieved to get home and get it all off
Reactions: subbysecret, rogerm73 and droptokon

After quite a bit of digging around on old hard drives I managed to find a few original Gerard Titsman videos. These are tiny little things in weird old formats, but I managed to grab a small bit from one that illustrates what I was discussing previously. I've crammed it down into a GIF small enough to upload here for your enjoyment. It captures really well that moment of anguish and pain when these big jugs come slapping down.

If I get time I may convert a few more just for fun and to preserve a record of this great work.
For anyone interested in seeing the full clips let me know and I may be able to put them on a fileshare somewhere for download.
Reactions: subbysecret, sexycandie1 and rogerm73

Here's a second one, couldn't resist doing this section as the look on her face is priceless!

Last one from this clip, you can lip read this pretty easily, lol...

droptokon said:
Last one from this clip, you can lip read this pretty easily, lol...

She nearly gave herself a black eye there!
Reactions: droptokon

i bet my jugs would look like that if i jumped
Reactions: subbysecret, droptokon, milly and 1 other person

Of course you can always test that out. If you don't have a mini trampoline some skipping, star jumps or just jumping on the spot will get close to the same result.
And then there's always going for a jog braless with a loose top (or no top) so they have plenty of room to swing and flop around.

wouldn’t y’all love if i posted it here?
Reactions: subbysecret, milly and droptokon

sexycandie1 said:
wouldn’t y’all love if i posted it here?
Click to expand...

We'll take that as a promise that you will. C'mon we need to see your big boobs flopping up and down!

Apparently the size of the file is too big

Big boobs make big files! Let me see what I can do.

This is it, @sexycandie1 jumping to make her big boobs bounce and slap for our enjoyment.
She really puts in some big jumps and makes them slam about really hard, wonderful stuff!!!!

Now c'mon everyone, show some appreciation for this awesome display!!!
Last edited: Aug 6, 2022
Reactions: Thongfetish, Deep, lifeshard and 23 others

don’t think anyone likes it
Reactions: The king

sexycandie1 said:
don’t think anyone likes it
Click to expand...

You'll need to wait a while, it's the middle of the night in the US and early morning in Europe so this is the quietest time of the day. I know you'll get some reactions when they all wake up and take a look here.

aah no problem, i’ll wait then

droptokon said:
This is it, @sexycandie1 jumping to make her big boobs bounce and slap for our enjoyment.
She really puts in some big jumps and makes them slam about really hard, wonderful stuff!!!!

Now c'mon everyone, show some appreciation for this awesome display!!!
Click to expand...

@sexycandie1 you have some beautiful boobs! love how they move!
Reactions: droptokon